PRACTICAL INFORMATION FOR YOUR VISIT IN VIENNA

The currency in Austria is the Euro.

If you need to exchange money, we recommend you to visit a bank, not an exchange office (where fees are typically higher). A cash dispenser (ATM) is located at the venue.

Opening hours are Mon – Fri 9:00 – 18:00. On Saturdays and Sundays, money change offices are open at the airport, at Westbahnhof railway station, and in Kärntnerstrasse.

Cash dispensers (ATMs) are located next to most banks (watch for a green-blue “B” sign as shown in the picture to the right), either directly in the street, or inside the lobby (accessible with your card). Maestro, MasterCard, Visa and DinersClub are generally accepted. 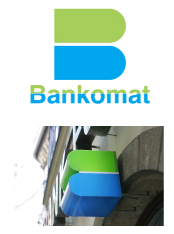 Main shopping areas are (all are relatively close to the conference venue):

The weather forecast for the EPS-HEP2015 (as for any other period of the year) is: Partly sunny, partly cloudy, precipitation is possible, now seriously.

End of July the the average temperature is around 20 degree C, but of course excursions in both directions can occur.

The graph to the right shows long-term average climatic data for Vienna. Click here to go to the source, where you can find a numeric table and the same information in imperial units. 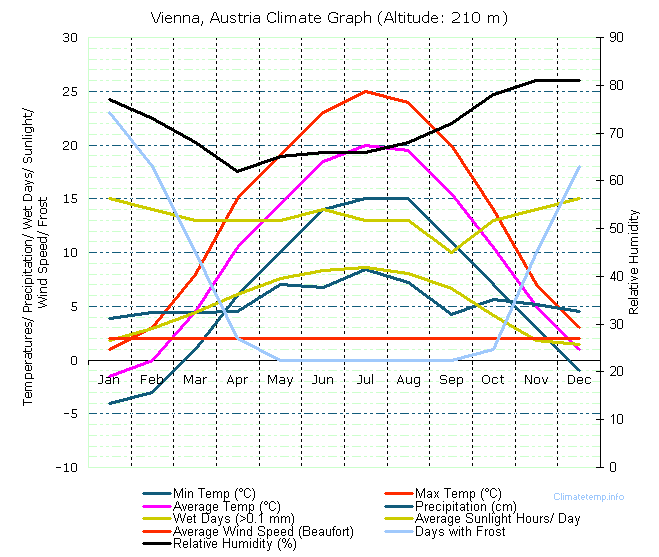 However, you still have to consider the physical layer in order to achieve connection. The F type wall socket used in Austria is shown to the right, which is quite common in central Europe – with Switzerland being an exception. It fits with the so called Euro plug or “type C” (shown on the leftmost photo), which is the typical plug for portable devices on the continent, and a bigger version with grounding as shown in the center photo.

You can safely drink tap water everywhere in Vienna. When this is not allowed, it is explicitly posted (Kein Trinkwasser), typically at fountains where water is mostly circulating. However, there are some public drinking springs in the city where it is perfectly fine to quench your thirst.

Vienna’s tap water is delivered from mountainous regions about 100km to the southwest and has superior quality. Two underground pipelines to the city were already commissioned in 1873 and 1910, respectively.

If you buy bottled water, there are usually two choices: (highly) carbonated (prickelnd, mit Kohlensäure) or plain (still, ohne Kohlensäure). Sometimes, there is a third option which lies in between (mild, mit wenig Kohlensäure) and probably comes closer to the international standard of carbonated water. 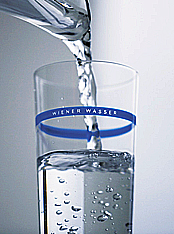 In general, Vienna is a pretty safe city and you can go anywhere at any time without restrictions. However, general precautions and a practice of common sense are always advisable, as pickpockets are attracted by (tourist) crowds and thus typically appear in the city center and in the proximity of sightseeing spots.

Medical infrastructure is excellent in Vienna, but it may become costly if you are unlucky and need serious treatment. Inside the European Union, medical expenses may be covered by mutual agreements between countries. If you are in doubt, we highly recommend you to take out adequate travel and health insurance.

Please note that neither the Local Organizing Committee, the International Organizing Committee nor the International Advisory Committee can take any liability for accidents, illnesses or injuries that may occur at or during the conference, no matter if those happen at the venue or outside. Moreover, the committees mentioned above accept no liability for any losses incurred by participants and/or accompanying persons, nor loss of, or damage to, any luggage and/or personal belongings.